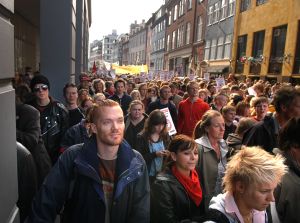 As a union member and a teacher, I believed I was getting the shaft back when Wisconsin enacted Act 10. Now that we're about to become a Right to Work state, I find myself wondering how I really feel about unions. Of course, it doesn't really matter how I FEEL about them, does it? Allow me to illustrate why it does and why they won't win.

Just to be clear, I did get screwed over by my own union because it offered nothing to help me when I got laid off. But that's not most people, so I will disregard it for this article. The point isn't what unions don't do; rather, it's what union leaders, members, and supporters do do. Case in point, when Act 10 passed in Wisconsin, limiting the rights of mainly teachers, the union organized huge rallies, invited all the usual suspects, and talked the same talk as always. Chanting something about solidarity at a protest is like preaching to the choir. Having a burned-out 60s band perform at a rally is like preaching to the tree-hugging, high as hell choir. The same people that figured out a way to help get a black man elected president couldn't figure out how to fight fire with fire? Cotton candy, instead?

Whenever teacher union leaders speak, they look like they just rolled into the union office after teaching at a freakin middle school all day. Maybe some of them had, but the IMAGE others receive is what's important here. My teachers' union looked like it was run by a bunch of teachers. The other side had beautiful people as figureheads. We love our former teachers, but we love beautiful people even more, and in a more lustful and meaningful way. There are so many hot, young, union-supporting college girls that would just need to shave and take a shower in order to get the talking heads and spinning heads to take notice, but unions instead hire old hippies with streaky gray hair and antiquated glasses to spew on about something no one's even listening to. I mean, Matt Damon couldn't even save WEAC from blowing the opportunity to bury Scott Walker. Matt Beautiful Damon!

The union leadership is not totally to blame. Sure, if they look too professional, people will talk about the union bosses and their swanky spokespeople, so the unions might be limited to dressing like OTR truckers and high school math teachers. It's who they are, or were. But that's part of the problem. The other day I was out shoveling the neighbor's driveway when I noticed the recycling truck was coming up the block. We had a foot of snow, but I got the path shoveled just in time to bring the recycling down to the road. Problem is, I set the cart right next to the other neighbor's cart (and too close together for the magic arm to pick them both up). Keep in mind, there are a total of four carts out at this point since most people are snowed in. However, the garbage truck driver / union member, who looked quite a bit like David Lee Roth, comes walking up the driveway with a piece of paper. He asks me twice: "Did you just move that cart down there?" and then goes into how people are going to start getting fines and he'd just walked up the block and gotten the carts ready for his truck and on and on. Really, on and on. Finally, I turned (hoping he wouldn't actually throw a punch) and walked away, as a I left him with: "Just do your job."

The problem is that the experience with David Lee Roth led me to want to write an article about AND question what in the world I was doing when I posted a comment about unions defending garbage men along with teachers. Then again, a baseball teammate said he (a union guy) wouldn't support teacher unions because they always buy foreign cars (all except me), so I guess we all pick and choose. The point is that my union as a teacher and professional gets lumped into David Lee Roth's union and American car loving guy's union by outsiders, so even though I think David Lee Roth should find another career as a sign holder for a tax service and American car loving guy thinks teachers deserved to get nailed, we're all part of the same big, bad union in other people's eyes. And we asked for it.

And that's why the unions, for all the good they've done, can't really win. If David Lee Roth, American car loving guy, and middle school teachers wearing sweaters can turn me, a union member, off, what do you think a local computer programmer making $100,000 a year and driving a Lexus thinks of us? Advice: hire the firm that turned Scott Walker into a potential presidential candidate and do every single thing it tells you to do.